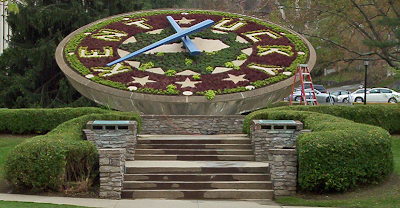 Friends, neighbors, Kentuckians, if I don't see you until we get to the other side: Happy New Year!

Concepts such as "January 1", "six o'clock", and "the year 2011" aren't real. In fact, there is, scientifically speaking, no such thing as a precise "year" anyway, because of orbital eccentricity. Such terms are simply relative constructs that are the result of considerations made and agreed upon by humans. You could proclaim yourself to be the creator of your own one true Pulcovian calendar based on a 17 month cycle with years starting in what we call "summer", and you'd be just as right as anyone else, as far as the lilies of the field are concerned.

And as I've noted elsewhere, some contemporary researchers like Clifford Carnicom claim that drift-rate analysis of our time standard shows unexplained dilation and variation, and that undocumented revisions to Universal Coordinated Time (UTC) may be occurring.

What hope has man of accurately marking time when even atomic clocks are subject to Special Relativity?

And how much longer will marking time even matter, anyway, as the world brain of the internet is well on its way to infecting outer space? NASA and DARPA are currently working on an interplanetary internet that will somehow function despite the spacetime distance issues.

But who the heck are they building this interplanetary internet for, when there's supposedly no other humans on other planets? Do they know something we don't? Answer: of course they do.

Our own most accurate (but not perfect) method of marking time for ourselves - the rising and setting of our sun - is meaningless on other planets anyway. Or is the plan to impose our Earthly Julian Calendar of 365.25 days on the whole universe?

And then there's this to consider.

Happy Pulcovian Summer Solstice.
Posted by JSH at 10:02 AM