Branham was born in Burkesville, KY in 1909 to a Catholic family. As a young man, he began racking up an impressive career as a boxer, with fifteen wins on his record. He coulda been a contender, but something happened that caused him to abruptly change his life's trajectory in favor of the Baptist church. He hung up his boxing gloves, donned a suit, and began preaching the gospel in tent revivals.

Preaching was definitely Branham's calling - he was very charismatic, so much so that he quickly acquired his own church with swelling ranks of devotees. As his congregation grew, so did his messianic nature. On June 11, 1933, while baptizing people in the Ohio River between Louisville and Jeffersonville, he claimed that a bright light descended upon him and a disembodied angelic voice told him, "As John the Baptist was sent to forerun the first coming of Jesus Christ, so your message will forerun His second coming."

As the 20th century progressed, many other thinkers and gifted individuals (including fellow Kentuckian Edgar Cayce) began feeling their way from traditional theology toward what would later be known as "New Age" philosophies. Branham's beliefs went from Baptist to Pentecostal, then gradually became more and more apocalyptic and further out past the fringes of mainstream Christianity. 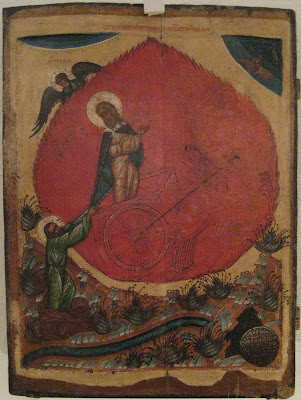 Branham claimed to be the literal reincarnation of the Biblical prophet Elijah, and that his past lives extended throughout history. Says Branham, he was with Moses at the Burning Bush and saw the parting of the Red Sea. I've always wondered if he ever listened to the folk song "I Was Born About 10,000 Years Ago". (I like the Elvis version best!)

Branham was also a major proponent of the controversial "serpent seed" doctrine, which held that the snake in the Garden of Eden was actually a reptilian humanoid who mated with Eve to produce Cain. The idea did not originate with Branham, however; it was once a relatively accepted idea in early Jewish Midrashic texts and in the obscure Rabbinical treatise Pirke De-Rabbi Eliezer (פרקי דרבי אליעזר).

Branham's grave is located in Jeffersonville, Indiana. Many of his followers are still active today. 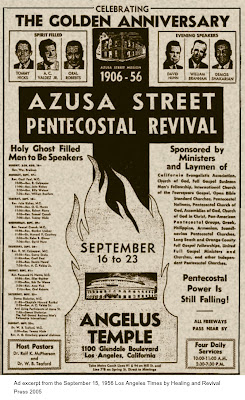 Consult your copy of Weird Kentucky for more Branham revelations!

(Top image: Branham preaching. Middle image: the prophet Elijah, riding his flaming chariot across the sky. Bottom image: poster for a 1956 event with Branham. )
Posted by JSH at 12:57 PM