Is White-Nose Bat Syndrome in KY or Not? 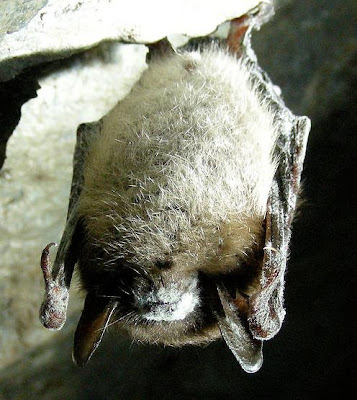 On June 6th, the Pittsburgh Tribune-Review published a story about the mysterious and incurable White-Nose Bat Syndrome being found in bats in Kentucky, within 30 miles of Mammoth Cave.

On June 7th, that story was subsequently picked up by the Lexington Herald-Leader's kentucky.com:

White-nose syndrome, a fatal and mysterious disease that is killing bats, has been found in Kentucky, reports the Pittsburgh Tribune-Review. A group of researchers met in Pittsburgh to discuss the disease, but "they left without any more solutions with which they arrived," reports the Tribune-Review. The disease has been confirmed within 30 miles of Mammoth Cave, Cal DuBrock, director of the Pennsylvania Game Commission's bureau of wildlife management said to the newspaper. 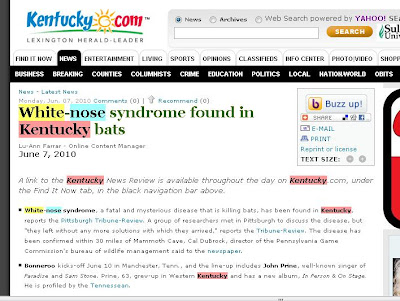 Now today, the Herald-Leader seems to be backtracking. The original story on kentucky.com has disappeared but can still be found in the Google cache, and the paper is now saying the incident in question is in Tennessee, about 80 miles from Mammoth Cave, not 30. Regarding the discrepancy, the paper has this to say:

The Pittsburgh Tribune-Review reported on June 6 that the disease had been confirmed within 30 miles of Mammoth Cave and that Mammoth Cave is home to some of the largest bat concentrations in the country. Both of those statements are inaccurate, Carson said.

To say that white-nose syndrome has been found within 30 miles of Mammoth Cave would have to mean it's been found in Kentucky, which it hasn't, Hemberger said.

Cal DuBrock, director of wildlife management for the Pennsylvania Game Commission, was the Tribune-Review's source for both pieces of information about Mammoth Cave. DuBrock said when he told the Tribune-Review that information, he was citing a presentation at a white-nose syndrome conference he attended in Pittsburgh.

The presenter said that a case of white-nose syndrome was found 26 miles from Mammoth Cave and that there was a fairly high concentration of bats there.

There must have been a misquote or misstatement on someone's part, DuBrock said.