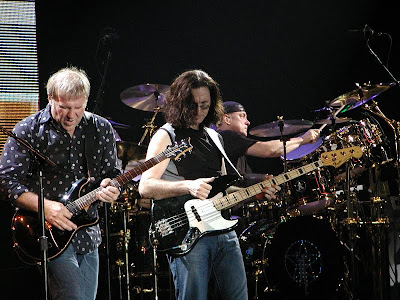 Rand Paul, the Republican candidate for the Kentucky Senate seat, has been illegally using the Rush song "Spirit of Radio" in his commercials and at campaign rallies. The band's attorney, Robert Farmer, has warned Paul to cease and desist forthwith.

"This is not a political issue - this is a copyright issue," Farmer told the Courier-Journal. "We would do this no matter who it is." The Courier-Journal has also reported that Paul has quoted two different Rush songs in his materials, which is permissible under Fair Use, but the band clearly would rather not be co-opted by Paul's campaign.

This isn't the first time a band has objected to political use of their music. Barack Obama used Sam & Dave's classic R&B hit "Hold On! I’m Coming" in commercials without Sam Moore's permission. Moore, offended that the campaign simply took the song without asking, ordered the campaign to stop using his voice.

Sarah Palin used Heart's "Barracuda" as an entrance theme, which spurred Nancy Wilson to sic her attorneys on the National Republican Party, and to announce in a statement, "Sarah Palin's views and values in no way represent us as American women."

When Bill Clinton appropriated Fleetwood Mac's "Don't Stop" as his campaign theme, the band members initially balked, but subsequently changed their mind and ended up becoming Clinton supporters and performing at the White House.

Ronald Reagan famously used Bruce Springsteen's "Born in the USA" at rallies and even commented in speeches about what a proud statement of patriotism the song was, totally missing the point that the song was a litany of modern American failures and disappointments from Vietnam to the 1970s recession. Springsteen later joked onstage, "I wonder which one of my albums is his favorite. I don't think it was the Nebraska album." (Nebraska was a stark and depressing collection of songs about people who failed to attain the American Dream.)
Posted by JSH at 10:10 AM