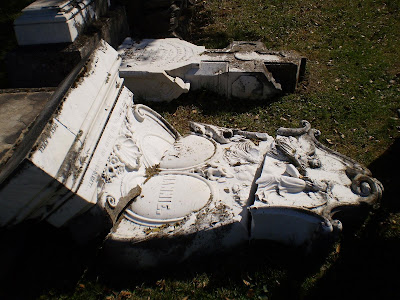 Back in April, we noted that Richmond Cemetery in Madison County had been attacked by vandals causing widespread destruction. Now UnK reader Patricia Bergman has submitted to us some photos of the damage done to the graves of her own kinfolk.

Above: Grave of Lucy A. Collins and Nannie Stone. Below: Grave of Mildred Stone.


Additionally, Patricia provided some interesting background on these ancestors:

Lucy Ann Collins was born on the 21st of February, 1846, in Madison County, Kentucky. She was born the third child and only daughter of the five children of William Smith Collins and Mary Ann Bronston Collins.
Her childhood was a time of innocence, both for the nation and for Lucy, who formed an inseparable bond with a playmate by the name of Nannie Stone. Lucy and Nannie grew up together, learning lessons that would serve them well as wives, playing with their porceline faced dolls, and spending time enjoying the hum of small town life.
However, just as Lucy and Nannie began to mature and become marriageable young women, other forces were growing into fruitition as well--political tension between abolusitionists and those that supported the rights of states began to clash. In Kentucky, the true brother-against-brother state, the Collins family cast their lot and openly sympathized with the Confederate States of America, despite Kentucky’s official status as a state in the Union.

Like the daughters of many of Kentucky's Confederate sympathizers, Nannie and Lucy were sent further south, specifically to Colonel Churchwell's School in Knoxville, Tennessee, where it was felt by their families that they would be safer, as they were further from the border and thus the troops that were sent into Kentucky to protect it for the Union.
The war had transformed the school from a place of education to a makeshift hospital, a place of disease and disfigurement. As women on both sides strove to treat the wounded, sick, and dying men of that terrible war, Lucy and Nannie did the same. The risks were great and, sadly, both women contracted tuberculosis and succumbed to the disease.

"Died at Col. D. W. Churchwell's near Knoxville, Miss Lucy A. Collins, of Richmond, Madison County, Kentucky, and aged 17 years, 2 months and 17 days. Her friends, and Kentuckians, are invited to attend her burial at the cemetery, this evening, 21st inst., at 4'oclock, P. M. The procession will form at Col. Churchwell's residence at 3:o'clock P.M."

However, Lucy Ann and Nannie were not buried where they passed away, in an unfamiliar Tennessee, due to the actions of her younger brother, William Joel Collins. He was a mere slip of a man at the age of fifteen, and, upon seeing the grief of his parents and Nannie's, young William traveled in a spring wagon from Richmond to Knoxville to collect the bodies of his sister and her beloved friend, despite the clear danger of such travel in 1863. The women were interred together, with one gravestone for the two, displaying their names, protected by two angels. These two angels protected Lucy and Nannie’s final place of peace together--together until April 3, 2010. 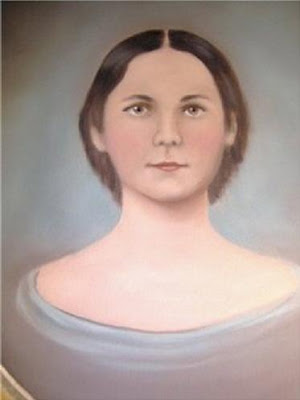 Above: Portrait of Lucy Ann Collins. Below: Grave of Mary Ann Bronston Collins. 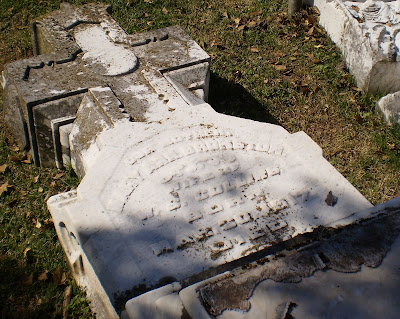 Thank you very much for posting this, my family and I deeply appreciate being able to tell one of the many stories of the people whose gravestones represented their lives.

Our family hopes for a speedy and just punishment for all of the many, many
families involved.