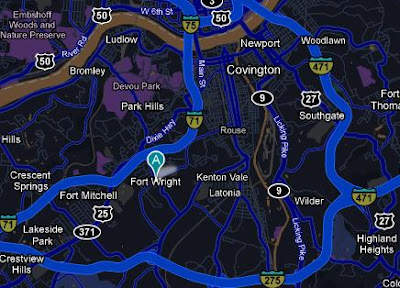 I am hoping someone else saw this Saturday night. I was at a birthday party and around 10:30 We were all on the front porch of a my friends house in Ft. Wright Kentucky and someone there pointed I think it was the southwest direction and we saw hundreds of pulsating lights going across the sky. It looked like a plane would look at night but there were hundreds of them. It was a cloudy night so they were definitely traveling under the clouds pretty slowly across the horizon. We lost sight after they traveled behind the treeline across the street. After the majority of them were behind the treeline we would see a couple here and there trailing behind. I have never in my life seen anything like that before. I have been searching on the internet to see if I can find anything on it but have not had any luck. I e-mailed the Cincinnati Observatory but have not gotten a response from them either. I know I am not crazy. Everyone else at the party saw it too. If anyone has any answers, please let me know. It is driving me nuts. I tried to take a video with my phone but it did not work. Thanks for your time.

After scouring the internet for other reports of this incident, however, I found nothing - other than other bloggers talking about this same MUFON post. In such a densely populated area, surely someone else saw the phenomena and can step forward?
Posted by JSH at 12:06 PM

I see "hundreds of pulsating lights" regularly when planes are landing repeatedly at the airport. Standing in front of the old Kroger in Ft. Wright and facing east, you will see several planes landing one after the other, as if the airport has resorted to using only one of their runways. I don't know why they do this, but the oncoming view looks like several dozen lights bunched together.