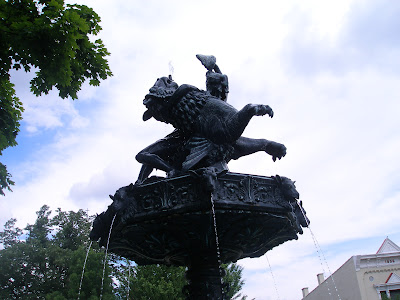 Across the street from the Shelby County Courthouse - not far from the Shelbyville Time Capsule - stands this highly peculiar figural fountain. It features a reclining woman lounging with a mythological beast: a bat-winged lion that is either missing its lower half or is seemingly emerging from an opening. To make matters even more puzzling, the bat wings seem applied upside-down to the lion's sides. 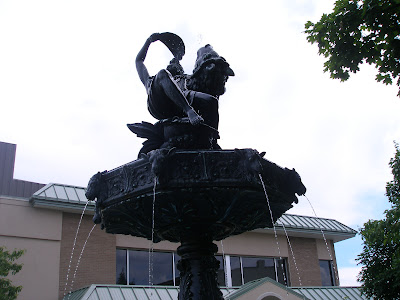 There's a plaque nearby that reads: "This fountain was purchased jointly in 1895 by city and county from J. L. Mott Iron Works, New York. It was erected at intersection of Fifth and Main Sts. upon the completion of Shelbyville's first public water works. Moved in 1914 to public square to clear the street after construction of new courthouse. Figure chosen for top of fountain is 'Atlantis' pattern." 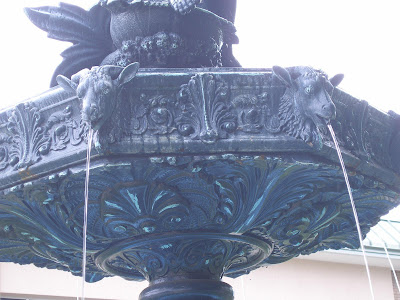 And what's so Atlantean about a bat-winged lion? According to Plato, the temple in the center of the lost continent of Atlantis was dominated by a statue of Poseidon driving six winged horses, but horses ain't lions and the wings of Pegasus were birdy, not batty.

Since a complicated occult mythology was built up around the idea of Atlantis by Kentuckians such as the psychic Edgar Cayce and the uber-huckster Editha Salomon (aka "Laura Horos", aka "Anna Sprengel", aka "Ann O'Delia Dis Debar"), I'm curious if they ever saw the statue, and what they thought of it. Did they find it inspiring, or were they as kerfuffled as I?
Posted by JSH at 9:25 AM

I love the Shelbyville Fountain, but I never drew the Atlantis connection!

is that smoke coming out of the pipe in the lions mouth?

Nope, it's a wimpy jet of water, actually. Whatever powers that part of the fountain seems to have fizzled out and is now just a slightly upwardly mobile trickle. Would love to see it operating in full force.