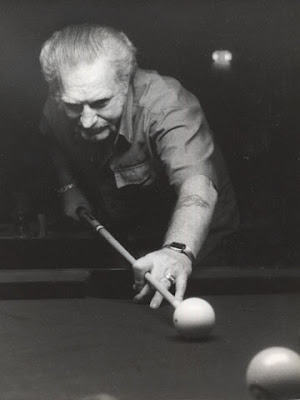 According to the book Cornbread Red: Pool's Greatest Money Player, "in a fast, thrilling and sometimes dangerous culture, Red learned the "Rules of the Road" from hustlers, gamblers, con-men and champions."

Cornbread, whose real name was Billy Burge, went on to Las Vegas and Detroit and became one of the greatest money-earning players and proposition men of all time. According to Wikipedia, when someone asked Cornbread about the highest-stakes game he ever played in, he replied that it was a Race To Six for $100,000.

Not bad for a Kentucky farmboy.
Posted by JSH at 10:22 AM

I just happened to run across your post about my father, Cornbread Red, and wanted to comment.

My fathers book, Pool's Greatest Money Player, isn't entirely accurate. There is a HUGE chunk of his life his 2nd wife (who basically oversaw the entire book project) left out. However, you were correct, my father was a Kentuckian, and was raised in Pudacha, Ky. :)

There is another older book titled: The Lions and the Lambs by Thomas Fensch that is sort of a compilation of different pool player stories which includes a chapter of my father's early life during the 1960's. The book is listed on Amazon.com but I will warn you it's quite pricey.