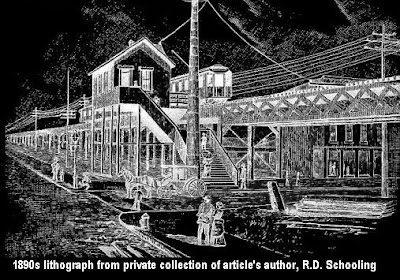 They've fallen down the memory hole now, but believe it or not, Louisville once had an elevated passenger train system back in the 19th century. Now Ron Schooling has pored over what little remaining fragmentary historical evidence there is about the trains. Read his fascinating findings on Brandon Klayko's perpetually useful Broken Sidewalk blog.

There's no reason - absolutely no reason - we couldn't get something like this going again, right now, and inexpensively. If they could do it with 19th century technology and resources, so can we. And as people have commented here:

"We've already got tracks in place running to West Point alongside Dixie Hwy and Peewee Valley on the East side. Strikes me it wouldnt cost much money to wake up existing train stations that been in place 100 yrs."

"There is also another great commercial track that runs from Shepherdsville into Germantown, going past Ford, UPS, PJ Stadium and UL. In fact, the tracks run right THRU UofL's Student Center and it virtually looks like a train station is already there. When this line reaches Shelby Park, it turns before crossing over Baxter at the aformentioned Lexington intersection (and its decrepid old, graffiti covered station. From this, the line continues up Frankfort into the east end. The junction of this track at Lexington and Franfort could be extened with a nice elevated line up the much too wide, and largely deserted Jefferson street, which is seeing new life with high density developments like Liberty Green and the east market gallery district. The final line could eventually be developed built from scratch up Bardstown Road to Mt Washington, but the conundrum would be where to lie tracks thru the Highlands."

(Meanwhile, I'm currently designing a human-powered pedal train. Be afraid. Developing...)
Posted by JSH at 9:29 AM

Yes, please! All of the above. There may be no better way of relieving traffic congestion on and around Spaghetti Junction. And imagine all the Downtown/Fairgrounds parking we'd be able to avoid.

Elevated trains are some of the safest, most environmentally-friendly and efficient modes of public transportation that exist. Bay Area Rapid Transit (BART) is a great example.

I heard Daniel Mongardo being interviewed on Krusier's program on 590 WVLK AM a couple of weeks ago and talking about how a new modern, national railway system is in the planning stages.

It seems that part of his Senate campaign is a monorail system for Louisville that will connect to the future National railway system.