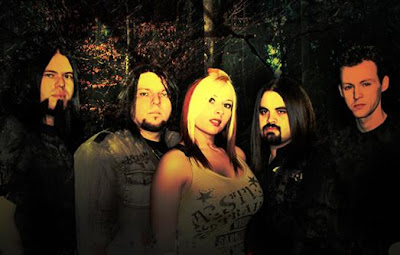 Ever heard of Hydrogyn? Me neither. But they seem to be someone we should know.

They're a metal band based out of Ashland, KY that have been plugging away since 2004, albeit with a constant turnover of band members. They're fronted by a eye-catching vocalist named Julie Westlake. I haven't paid much attention to metal music post-90s, but the band seems to be going places, having Michael Wagener as their producer (he's produced albums by Metallica, Ozzy, Alice Cooper).

And now, in their latest lineup shakeup, former Megadeth guitarist Jeff Young has joined the band. According to Blabbermouth, "The band is currently in the midst of writing and recording tracks, has a live DVD in the offing and a simple mission: to rock every town on planet earth."
Posted by JSH at 12:00 AM