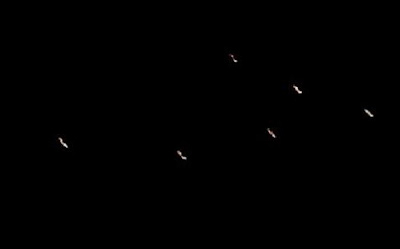 From MUFON, by way of Billy Booth:

01-04-10 - On our way home from Paducah to Mayfield, I noticed six orange lights gliding slowly in the sky just off the side of the highway. The lights appeared to be moving at a slow rate of speed. My wife, two children and I observed these lights for approximately 5 minutes or more.

Several other cars pulled over on the side of the highway in that area as well. The lights slowly faded out of sight one at a time, beginning with the one at the tip of the chevron and ending with the last light. I was able to take the picture with my cell phone shortly before the lights started disappearing.

The person filing the MUFON report doesn't say at what point between Paducah and Mayfield they were when the incident occurred, but most of the trip would be in McCracken County, and they most likely took Highway 131 South.

The sighting has great similarity to two others that recently happened in states bordering Kentucky. In, Youngstown, OH about a month prior, on December 5, 2009:

I noticed five or six orange lighted craft in formation traveling from the ground up. I pulled over to get a better look and realized that there was more like 9-12 of them. The lowest was at about 700 feet and the highest was about 2500 feet. At one point the craft had stopped and then they started to move again and climbed to the highest elevation (2500 feet) and disappeared one by one until they were all gone. 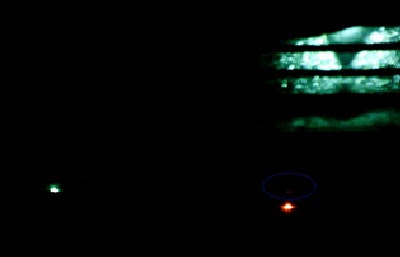 And in Lenoir City, TN, on January 3, 2010, the day before the Kentucky sighting:

I was getting a drink from the kitchen and looked out the window when I saw two orange/yellow lights in the eastern sky. They stayed in the same spot for 8 to 10 minutes. I got my camera and started to take pictures. Then the lights started to move left behind a line of trees, and then moved up over the trees and back down behind them again. They were out of sight for at least 5 to 7 minutes.