The End Times? Not Again! 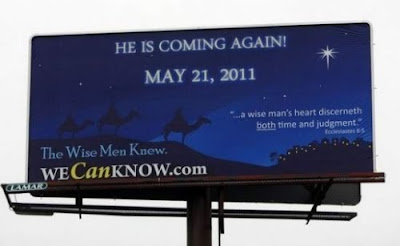 "The time is getting closer; I read it on a poster."
- - Alice Cooper.

There's nothing more self-destructive for a representative of one's religious faith to do than to declare a doomsday date. You may get temporary attention and fame, but when the end of the world inevitably doesn't come, you end up discredited and having turned more people against your cause. The kind of people who start these doomsday scenarios probably don't care, though, because they're almost always in it for their own publicity and not concerned about the reputation of the religious faith they've hijacked for their own ends.

Perfect example: last year these billboards started popping up all over the world, proclaiming that the Biblical judgment day will occur on May 21, 2011. These billboards aren't cheap - I think a billboard in Louisville runs between $2000 and $5000 a pop, depending on location and duration. Does the apocalypse really need an ad campaign?

A lot of these billboards are coming from someplace called Family Radio whose website "explains" why the Rapture is coming on May 21 by way of one of the most poorly-written and irrational treatises I've even seen. The date of 2011 is arrived at by piling arbitrary assumptions on top of bad math on top of mangled Biblical quotes on top of failure to realize that people in Biblical-era Jerusalem didn't observe the same calendar as we do.

Of a similar ilk is judgementday2011.com, who needs to learn to spell "judgment" before passing same.

It would be hilarious if it wasn't so dangerous. Every time some charismatic kook starts a "world's about to end" meme, there are always gullible people who quit their jobs, throw everything away, and put their lives in total disarray. Some have even committed suicide after the big day passes and Christ didn't show up. 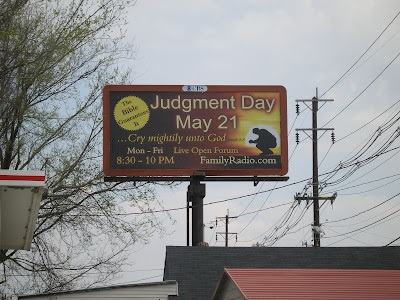 "We Can Know" is another affiliated bunch who are buying billboards, and so is The Latter Rain, whose name suggests connection to the post-William Branham "Latter Rain" movement, including "Joel's Army" - which has been described by the Southern Poverty Law Center as a "rapidly growing apocalyptic movement" who believe they possess "a divine mandate to physically impose Christian "dominion" on non-believers". 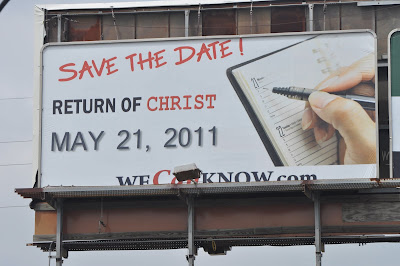 Another related group is eBible Fellowship, who are especially proud of their billboards - so much so that their site is almost wholly devoted to bragging about the placement of the ads in most countries of the world. They even have an interactive map that lets you track the progress of their ad campaign. Um, that's nice, guys, but if it really is the end times, don't we really have more important things to do? 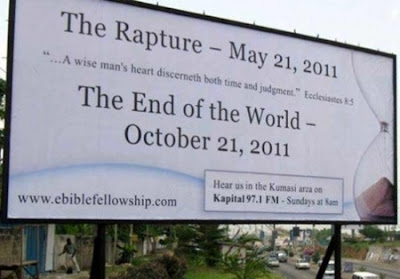 Apparently even though the Rapture is on May 21, the actual end of the world for the rest of us won't come until October 21. Okay. I need one of those giant foldout flowcharts that take up two walls in order to map out all the signs and seals and bowls and trumpets; it's all too complicated for me.

Like Ken Ham and his Creationist Museum, these doomsayers are far outside the fringe of mainstream Christianity, but at the same time apparently have a mysterious knack for fundraising. Imagine what these people could have accomplished to combat world problems like hunger and illiteracy, with the staggering amount of money they blew on this self-aggrandizing, masturbatory, mentally ill ad campaign.
Posted by JSH at 7:22 AM