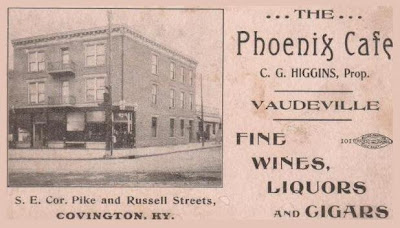 Here's a nice old postcard from a photo archive on the I Survived Covington group.

Oh, to have lived in the days of Covington's Phoenix Cafe (any relation to the one over the river in Cincinnati?) - a vaudeville house that, given the slightly seedy nature of the area, was probably closer to the realm of burlesque.

The Phoenix Cafe was located at the corner of Pike and Russell, and later became the Depot Cafe. In this incarnation, its name turned up in the legal case United States of America v. Sykes:

A bartender at the Depot Cafe testified that the three appellants would occasionally be together in the cafe and on one occasion told him while he was serving them drinks at a table that "they had a big job planned." Strunk testified that shortly before the arrest he and Preston were in the back room of the Depot Cafe and Sykes came back there and said, "I have the opportunity to make $5,000." Preston testified substantially the same, and added that Sykes wanted their opinion as to whether or not he should go through with it, whereupon Strunk said, "Well, if you are going to make $5,000, you must be going to rob a bank," to which Sykes replied, "Well, how did you know?". Sykes testified that he had been approached by some men to drive a car for them on a bank robbery and that he went to Strunk and Preston and had the conversation above referred to.

Currently the Welcome House is in this location.
Posted by JSH at 5:07 PM