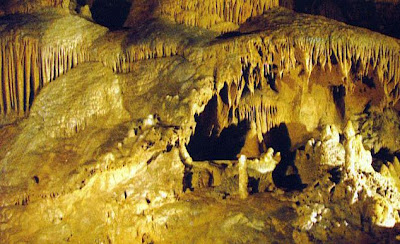 In 1950, two young boys in Cub Run, KY made an intriguing discovery: a small hole in a rock outcropping was emitting freezing cold air.

Their suspicions that they'd discovered a cave were confirmed as they hacked apart the rocks to make the hole big enough to crawl into. They found themselves in a mud-filled passageway, and crawled 60 feet further to find the tunnel opened up into a large chamber with more passages going off into darkness.

Excitedly, they went back to tell everyone what they'd found. Unfortunately, you can always leave it to grown-ups to screw up a good thing. The underground cave system sprawled beneath more than one person's property, and a bitter dispute between landowners erupted. Unable to come to any agreement on how to share the cave, they instead sealed it back up and put it out of their minds for the next 55 years.

Thankfully, Cub Run Cave was finally reopened and made available to the public in 2006. It's one of only four caves in the United States to have a rare formation called "Box Work", and hosts a plethora of critters such as cave crawfish, lizards, cave crickets and three different species of bats.

See more images of Cub Run Cave here.
Posted by JSH at 8:20 AM

Cool story! You just gave me a weekend trip idea. My BFF and I love to go spelunking... Maybe an overnight at Cave City with a trip to Cub Run is in order : )