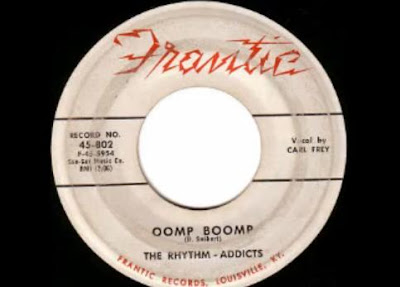 Spotted on YouTube: a rare 45 record from 1959 called "Oomp Boomp", by the obscure Louisville band The Rhythm-Addicts. This highly peculiar recording sounds a lot like the style of rockabilly weirdo Marvin Rainwater, but is also loaded with hipster nonsense verbiage, in the tradition of Slim Gaillard and Babs Gonzales.

According to rcs-discography.com, "Oomp Boomp" was the first of four singles the Rhythm-Addicts released and is the only known release from Louisville's Frantic Records. The band, whose members included Carl Frey, Bob Struck, Josh Noland, Bernie Schweickart, and Bob Smith, also recorded as The Coachmen.
Posted by JSH at 12:01 AM