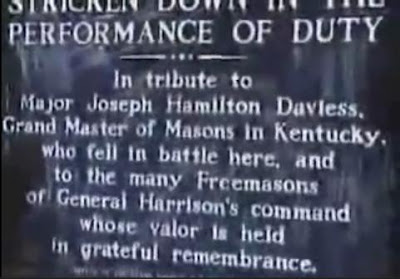 Kentucky's Daviess County is named after Joseph Hamilton Daveiss, the Grand Master of Freemasonry in Kentucky. And no, that's not a typo - his name was actually spelled "Daveiss", despite it uniformly being misspelled as "Daviess" on everything from roads to schools to courthouses to entire counties. This would also suggest that the correct pronunciation of his name would be like "Davis" and not "Davies".

Daveiss was something of an eccentric sort, preferring to practice law dressed in the buckskin outfit of a frontiersman. He was the first lawyer west of the Appalachians to argue a case before the U.S. Supreme Court, and he wore his woodsman suit even there. Far from being appalled, at least some were apparently impressed with something about Daveiss: he ended up marrying Chief Justice John Marshall's sister Nancy while he was in town!

Daveiss became the U.S. District Attorney for Kentucky, and relentlessly pursued Aaron Burr. In 1806, Daveiss brought treason charges against him but Burr somehow managed to get those charges dismissed thanks to his slick attorney: Henry Clay.

Despite being opponents in the courtroom, Clay and Daveiss were brothers in the lodge: they were both fellow members of the Freemason Lexington Lodge #1 in Fayette County. (And Chief Justice John Marshall was also a Mason - the Grand Master of the Grand Lodge of Virginia, in fact.)

Strangely, at the age of 47, Daveiss volunteered to fight with the Indiana militia in Tecumseh's War and was killed at the Battle of Tippecanoe. The Freemasons have erected a monument sign dedicated to him on the battlefield site.
Posted by JSH at 9:00 PM