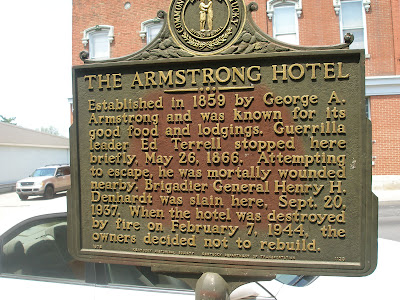 The Armstrong Hotel, which once stood at the corner of 6th and Main in Shelbyville, must have been an interesting place in the good old days. The historical marker notes that it was "known for its good food and lodgings" since 1859, but also for two newsworthy murders. 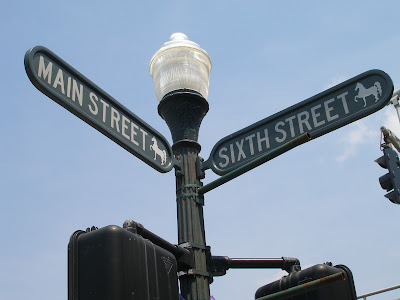 Henry Denhardt, former Lt. Governor of Kentucky from Bowling Green, was charged with the murder of his girlfriend, Verna Garr Taylor, and tried in LaGrange in November, 1936. 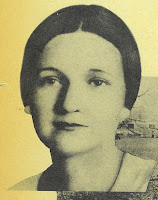 That trial ended in a hung jury, and while free on bail and awaiting his second trial, he was shot to death by Verna's brothers in front of the Armstrong Hotel on September 20, 1937. Denhardt, who had a reputation as a heavy drinker, had just come from a tavern down the street and was about to go back up to his room at the Armstrong.

Verna's brothers got off scot free, incidentally, and to this day no one can say for sure whether Denhardt was guilty or innocent of Verna's murder.

And back during the Civil War, Union guerilla leader Edwin Terrell stopped here on May 26, 1866 while on the run from the law. A posse caught up with him at the Armstrong, and though he tried to escape, he was shot to death nearby after fleeing the Hotel. Terrell sounds like an interesting rogue; according to an article by Stewart Cruickshank:

"Prior to the Civil War it is thought that Edwin Terrell performed in a circus. He reportedly killed a bartender in Baltimore but was acquitted of the charges. Oral tradition has it that Terrell served in the 1st Kentucky Infantry, C.S.A., in 1861. Terrell himself claimed that he'd served under General John Hunt Morgan and had escaped a court martial sentence of death for killing an officer. There is a record of an Edward Terrell enlisting in August 1862 in Morgan's 7th Kentucky Cavalry. This soldier deserted in September."

Someone posting as "David" left the following message, misposted on the "Hatchet Mailbox" entry. I reproduce it here, in hopes that David will come back and tell us more. I'd love to hear more details!

"Interesting post...the Denhardt case has always fasscinated me and is the subject of one of the stories in an upcoming book. A good friend of mine is a relative of Verna Garr's and he has provided me with lots of interesting information about the case."

Ooops! It was me, David Domine. Sorry about that. A good friend of mine is related to the Garrs and has told me many stories about this case. When I get a chance to dig up my notes, I'll pass on what I can. I do remember that other sources have said the road where Verna Garr's body was found is haunted today.

Oh! Hey David! Yeah, do tell... I had never heard about this case until just recently and I'm intrigued.