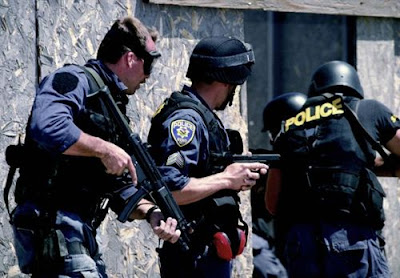 The Supreme Court, in an 8 to 1 decision, has given police greater powers to force their way into your homes, thanks to a Kentucky marijuana case.

Police officers who loudly knock on a door and "hear sounds that suggest evidence is being destroyed" may now legally break down the door and enter your home without a search warrant. That's right, without a search warrant. And what defines "sounds that suggest evidence is being destroyed"? Well, the police get to determine that for themselves. In other words, they've been given carte blanche to do whatever they want. (Like they don't already in some places.)

Residents who "attempt to destroy evidence have only themselves to blame" when police burst in, said Justice Samuel A. Alito Jr. I think it's amazing that Mr. Alito is already assuming, hypothetically, that the police are automatically in the right and that evidence was really being destroyed. If someone flushes a toilet, does that count as "sounds that suggest evidence is being destroyed"? Or running their sink's garbage disposal?

Historically, police have not been allowed to just bust their way into a home without a search warrant. That's now officially over. Just like a lot of other things.

The Los Angeles Times tells how we got here:

It began when police in Lexington, Ky., were following a suspect who allegedly had sold crack cocaine to an informer and then walked into an apartment building. They did not see which apartment he entered, but when they smelled marijuana smoke come from one of the apartments, they wrongly assumed he had gone into that one. They pounded on the door and called "Police. Police. Police," and heard the sounds of people moving.

At this, the officers announced they were coming in, and they broke down the door. They found Hollis King smoking marijuana, and put him under arrest. They also found powder cocaine. King was convicted of drug trafficking and sentenced to 11 years in prison.

Law-abiding citizens like you and me now have to fear that some moron is going to bust down our door if they make a huge mistake like these officers did, and smash it down if they "hear us moving."

Ruth-Bader Ginsburg, apparently the only member of the Supreme Court who still has a soul left, dissented from the rest of the herd and said the decision her fellow lawgivers made "arms the police with a way routinely to dishonor the 4th Amendment's warrant requirement".
Posted by JSH at 11:46 PM

Thank you for a very informative post--and bless Justice Ginsburg--but what a sad day in the Commonwealth, and our country, for the 4th Amendment. If you haven't read it recently, its very much worth a refresher:

"The right of the people to be secure in their persons, houses, papers, and effects, against unreasonable searches and seizures, shall not be violated, and no Warrants shall issue, but upon probable cause, supported by Oath or affirmation, and particularly describing the place to be searched, and the persons or things to be seized." [US Constitution, Amendment IV]

Nothing anti-police about being pro-constitution. I have friends in law enforcement who also share these same concerns about erosion of freedoms.

Your blog is killer... this is absolute bullsh*t. I'll never understand why people believe this anti-drug propaganda, which is all lies so far as I've heard, at the expense of so much freedom and peace of mind. I just don't get it at all. For the government, they're obviously using dope as a scapegoat to keep people's attention away from... *something*.