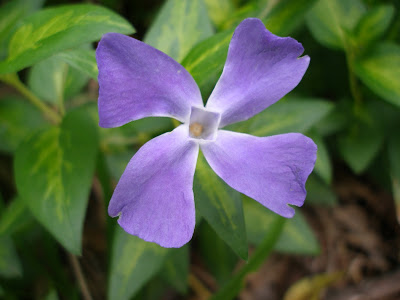 I was taking photos of various flowers, blooms and buds on my property today and happened to notice that a couple of the flowers on the Vinca growing around the edge of the house had only four leaves and a square-shaped center (above), as opposed to the standard blooms with five leaves and star-shaped center (below). 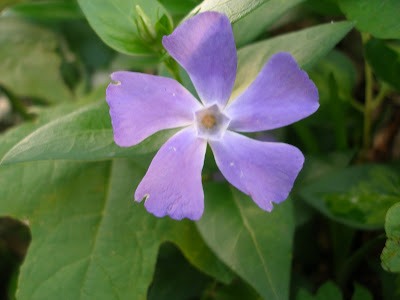 I did a quick glance at Google and neither a web nor an image search for "four leaf Vinca" brings up a damn thing about this being normal. It would seem that what we have here is a mutation. Though the radioactive particles wafting across the nation from Fukushima were naturally the first thing that entered my mind, it must be said that the four-leaf clover is an example of an occasional mutation that's been happening as long as there's been clover - no radiation needed. Still though, I wonder, hmmmmm, yes, I wonder....

(And if you have any interest in seeing my other pitchers o' purty flars, the rest of what I took today will soon end up at my new blog Visual Slushpile, an abyss where my photos for which I have no purpose will be indiscriminately hurled. Unlike our friend JLK's Image of the Week, which has a modicum of effort and forethought in its selection, my blog will be more of a random literal photo-dump of whatever, whenever, no rhyme, no reason.)
Posted by JSH at 12:00 AM