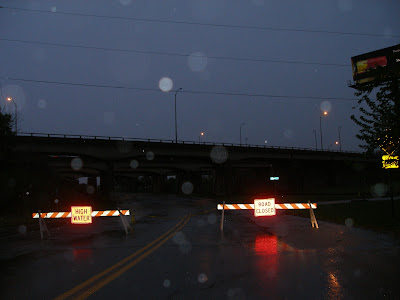 While the world watches and waits to see what further ill effects may occur from the Destruction of the Birds Point Levee, the storm fronts keeps moving in, rain keeps coming down, and flood waters keep rising like in the old Johnny Cash song.

Union County is essentially closed off and surrounded by high water now. According to the Henderson Gleaner, Union County schools and postal services are almost completely out. The Union post office has had to make an emergency relocation to nearby Henderson County.

Livingston County is under emergency evacuation as I type this. The evacuations in Smithland are mandatory and police-enforced, while residents of the towns of Iuke, Ledbetter, and Tiline are also being urged to evacuate for their own safety at this hour. Kentucky State Police have set up a temporary command post at Grand Rivers, and will be organizing all Fire, ambulance, and rescue operations from here.

In Fulton County, many worried citizens have been fleeing Hickman. Gov. Beshear has been monitoring the area in person, and said on Tuesday that blowing up the levee in Missouri was the right decision, because it's helping to take the pressure off Kentucky's own floodwalls.

In McCracken County, The Republic is reporting "The National Weather Service in Paducah forecast a crest of 55 feet, or 3 feet above flood stage, on the Ohio River in Paducah".

Kenton County was declared a disaster area last week when floodwaters closed a dozen roads and tornadoes ripped through the area. They, along with most of Northern Kentucky, are listed on today's flood advisory again as I type this.

Calloway County was, according to thenews.org, under a flood warning until this morning, and it will still take a lot of time for the water to go down. There is water over many roads, although none are closed down at this time.

In Jefferson County, flood waters crossed River Road and lapped at the edges of the Yum! Center and at Butchertown's flood walls. Today the water levels of the Ohio River are receding, but heavy rain is expected in the forecast and it remains to be seen whether the flooding here is truly over.
Posted by JSH at 2:48 PM