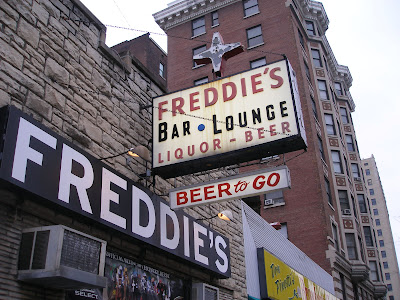 Imagine a bar that hasn't changed its decor in half a century. One where Frank Sinatra's picture hangs proudly without a trace of irony or "retro" consciousness. Where the music on the jukebox plays tunes from a bygone era, and the owner still runs the place at the age of 90, yet is in better shape than me and could probably kick my ass (you probably think I'm exaggerating. Let me assure you, I am not.)

If you have trouble imagining such a paradise, go no further than Freddie's Bar & Lounge at 220 West Broadway, downtown Louie-land. It is truly a haven for the true and discriminating Transylvania Gentleman, and deserves a historical plaque for its weighty value to society, past and present. They're currently celebrating 48 years in business, and it is my fondest hope they go for at least 48 more. 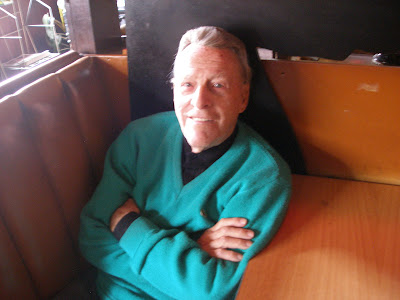 Freddie himself is an amazing Jerry Lee Lewis-like character with a million stories that define the century we just came out of. He can still be found in the place most days, and if you're a boxing fan then you and Freddie will get along just fine. His bar is filled from end to end with classic boxing memorabilia, and was actually a go-to place for all serious pugilists during boxing's golden years. 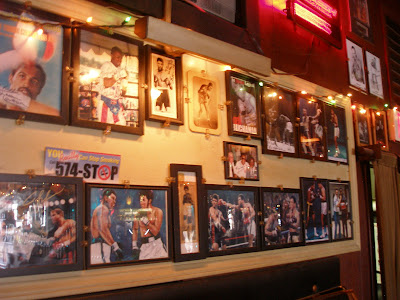 Among the boxers who have graced the bar stools at Freddie's: Ezzard Charles, Muhammad Ali, Greg Page and Jimmy Ellis, whose gloves adorn the bar. Get thyself a shot of whiskey, friend, sit at the bar, stare into those historic gloves, be still and know. 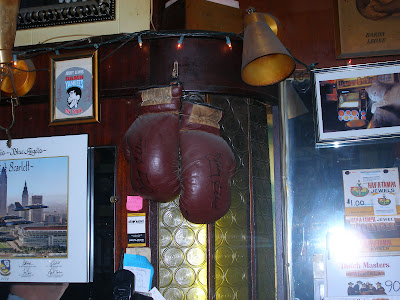 So famous was Freddie's as a patron of the boxing community that even Rudell Stitch visited the place even though he was a strict teetotaller.

There aren't many places like this left, and you need to stop what you are doing right now and go out and experience them while you still can, before they're all just extinct places you read about on the internet.
Posted by JSH at 10:52 AM

You know- I may just have to wrangle my best buddy and head down there. I am not much of a boxing fan, but I just love old men :) They tell the best stories.

Hey, wrangle me! Let's get a posse and invade Freddie's real soon.

Sounds like a plan, man! We'll holler at you when we come to town :D