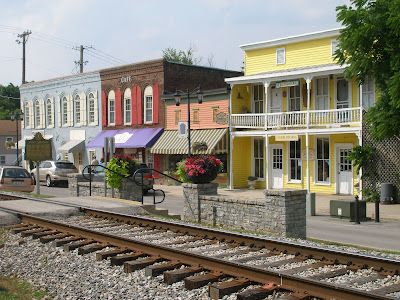 At the halfway point between Frankfort and Lexington you'll find the spooky little town of Midway, so named for its equidistant position which was deliberately chosen by the Lexington-Ohio Railroad Company. Accidentally and coincidentally, it also happens to be equidistant between Versailles and Georgetown.

The site where Midway now stands was once a vast farm owned by a man named John Francisco. Each year, the Francisco's Farm Arts Festival is held in Midway at Equus Run Vineyards, and this year's is coming up soon - June 25 and 26.

The area was once heavily populated by native American mound builders, which no doubt lends to the spooky feeling in the air here. 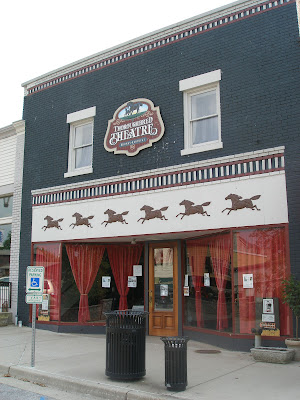 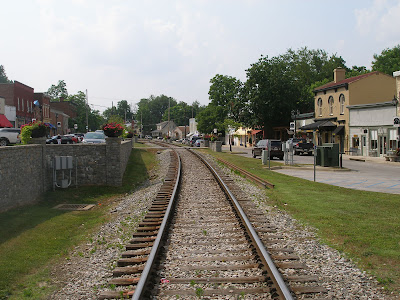 John Hunt Morgan stopped here on July 15, 1862, in an effort to trick the Union soldiers chasing him into thinking he was heading towards Frankfort. Morgan instead hid out briefly, then backtracked.

The Porterhouse steak supposedly originated here, at the still-standing Porter House. However, the Oxford English Dictionary credits its development to New York, circa early 19th century, before Midway even existed.

Zerelda Elizabeth Cole James Simms Samuel, mother of Jesse James and mentioned in the Tom Waits song "Diamond in Your Mind", was born here on January 29, 1825. 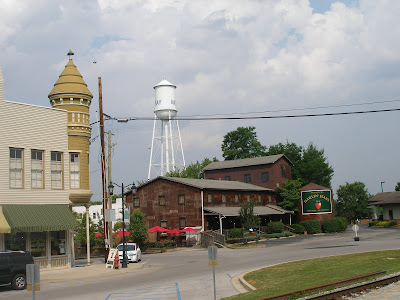 Beautiful little town. I'm going to be there on the 25th. Can't wait. Loved the blog.
Teresa R.

After looking at these pictures I really want to visit this place now. You should do a top ten Kentucky cities you have never visited but should list.

If you think Midway is spooky now, you should have lived there when I was growing up. In the late 80's/early to mid-90's it was basically a ghost-town (except for the festival, of course). As kids we used to scare ourselves with tales of ghosts at the college and even tried to 'investigate' the library once, but were kicked out. It was a lovely place to grow up in.