One from the Victorian Squares blog: 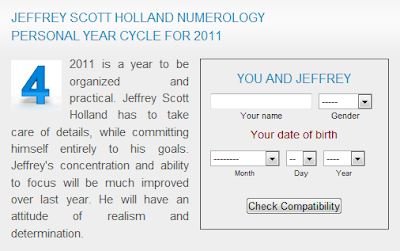 Okay, now this is creepy: I just found a "Celebrity Numerology" site that has a page about me, breaking down my personal numerology profile, astrological info, and biorhythm charts.

Even though I think it's all a buncha fried baloney, I have to say some of their observations about me are fascinating. Check out their "Soul Urge" page about me:

Holland is a visionary. He sees the horizon and the promise. In general, Jeffrey Scott Holland also sees the methods necessary to fulfill that promise. But he is not especially good with details; Jeffrey needs others to help him deal with the smaller parts of the picture. His challenge is to make full use of the full spectrum of his abilities, as indicated by his other core numbers. In the same way, Holland must bring forth the best from others and orchestrate their talents toward the realization of his vision. In short, Jeffrey Scott Holland must lead by example, demonstrating the standard for commitment, determination, and excellence.

Pretty wacky, eh? Wait, it gets wackier. This is from their numerological personality profile of me:

He is hard to get to know, and is often withdrawn. It is common for people to see Jeffrey Scott Holland's focus turn inside of himself in the middle of a conversation. Jeffrey has the makings of an intellectual and an aristocrat but he has to guard against arrogance and an attitude of "I have got it all figured out". There have been periods in Jeffrey Scott Holland's life when he had little concern for his clothing or fashion, while at other times he is very aware of his clothing and uses it to make a specific impression. Jeffrey appears dignified no matter how he dresses, but a well groomed seven with a touch of dash definitely has an advantage. Holland's confidence increases when he knows he is well dressed.

Jeffrey Scott Holland is recognized as spiritual and religious, with his very own ideas regarding the purpose of life and the Creator. He is an inspired speaker, but only when discussing subjects that really interest him. Otherwise, Jeffrey is not one for chatter. His love of knowledge and wisdom shows. 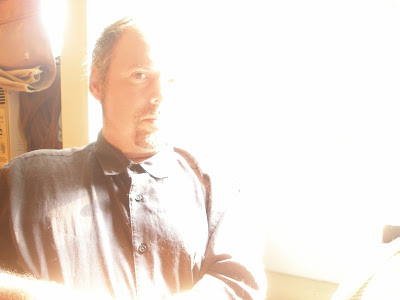 Wow, that's actually hitting a little too close to home. In fact, I had some trepidation about next clicking their "Destiny" page about me. Turns out I'm an "11", which it says here is "the most highly charged destiny number" of them all (say it like Jim Morrison):

Jeffrey Scott Holland has always sensed that he is different, but it was an indefinable feeling. Jeffrey is enormously sensitive and aware, especially as a child. This made Holland vulnerable to all conflicts and painful situations. For most of his upbringing, however, Jeffrey Scott Holland did not realize that other people did not possess the same sensitivity, nor did they see the same things he was seeing.

Holland compensated for his sense of separation in childhood by creating an elaborate fantasy world. He daydreamed more than other children. He had a lively imagination and even in adulthood has a hard time separating reality from fantasy.

Jeffrey Scott Holland's challenge is to bring forth his primitive, earthy strength. He needs to be grounded in order to deal with his lightning bolts. The more Jeffrey is able to call upon his inherent human strength, the greater his capacity to take advantage of his extremely sensitive awareness. Once this is accomplished, Holland's antagonist becomes his benefactor.

Jeffrey is highly emotional and dependent upon relationships. Emotionally, he goes up and down with the fortunes of his love life.

He is idealistic, impractical, and at times disorderly. Holland is often unrealistic in his expectations.

His reasons for doing things are usually born of a mixture of logic, emotion, and intuition, which can rarely be explained satisfactorily to his more rational associates.

I don't know whether to be insulted because the unflattering parts are absolutely spot-on, or to be pleased about the hyper-mystical stroking it's giving me at the same time. I think I'm just gonna try to forget about the whole thing and go lay down and listen to The Monkees some more.
Posted by JSH at 11:59 PM