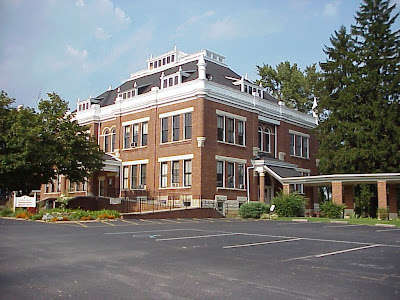 In the 19th century, Kentuckian Sue Bennett was a teacher and social activist who sought to improve education in impoverished rural areas. She and her sister Belle Bennett (not to be confused with the vaudeville actress of the same name) raised $40,000 - a considerable sum of money in the late 1800s! - to found their own school. Sue died before the project was completed, and Belle opened it in London, KY in 1897, calling it the Sue Bennett Memorial School in her sister's honor.

After a century of success, Sue Bennett College was forced to close down in 1997. For reasons that are somewhat opaque to me, the Federal Government rescinded their funding, on which they had come to completely depend. Oprah Winfrey tried to intercede by calling attention to the school's plight on her TV show, but it was to no avail. Sue Bennett College joined the graveyard of defunct Kentucky colleges like Southeastern Christian College (Winchester), Bethel College (Hopkinsville), Lees College (Jackson), Lexington Baptist College (Lexington), Urania College (Glasgow), Pleasant J. Potter College, (Bowling Green), and Cedar Bluff College (Woodburn). 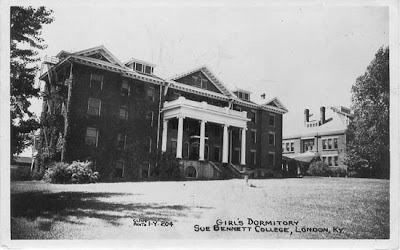 The buildings are still there, however. Some have been repurposed but the ghosts of the school remain. According to the Shadowlands: "They say the dorms and the theater are haunted and that Belle Bennett roams the halls all night playing the piano’s turning off and on lights and watching people sleep that still stay there if you go in your sure to find something." (misspelling and typos retained from original source).

Meanwhile, Theresa says: "a former student also shared information on a suicide that ocurred on the 2nd floor of Helm Hall. The apparition of the young lady who hung herself in that dorm is reported to have been seen more often than Belle." (I'm not sure how anyone would know whether the ghost in question is Belle or the suicide victim or someone else entirely, but there you have it.)

The biggest ghost haunting Laurel County seems to be that of the college itself. Many locals are still lamenting its passing, and hoping that some sort of higher education institution might form and put these college buildings back on track to their intended purpose.
Posted by JSH at 9:08 PM

I thought I read somewhere that Union College was going to use one of their buildings for classes. Also, apparently University of the Cumberlands now has the academic records and transcripts from Sue Bennett