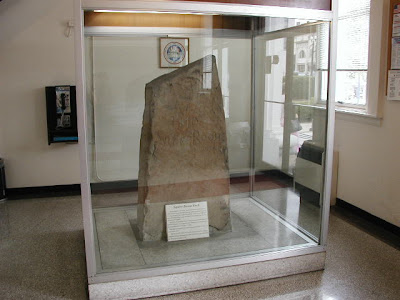 Squire Boone isn't as well as known as his brother Daniel, but he was just as much a frontiersman and explorer as his more famous kin. This is one of the few public tributes to the man.

If you go into the lobby of the Richmond Courthouse in Madison County, you'll find a glass case containing this large rock on which is etched "1770 Squire Boone". This stone was only discovered in 1892, in the woods off Jackson Lane (which is located between Pilot Knob and Big Hill), and was immediately deemed genuine.

Many doubt the authenticity of the carving, and rightly so, since basically anyone could have done it at any time.
Posted by JSH at 10:41 AM