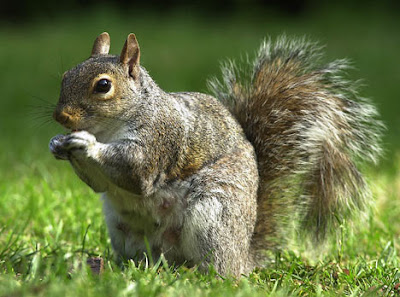 In September 1801, Napoleon’s French Army was pulling out of Egypt. Thomas Jefferson was in his first year as President and was probably already pondering his first State of the Union address that lay ahead in December. A battle was fought in the Seychelles between the British vessel Victor and the French ship La Flêche. And inventor Robert Fulton was close to developing the first functional steamboat.

Meanwhile, in Newport, Kentucky, something truly historic was taking place.

It began on September 1st, when a locust-like plague of tens of thousands of squirrels descended upon the city, seemingly out of nowhere. Crawling all over everything in sight, it must have been a horrific experience on a par with scenes from Alfred Hitchcock’s The Birds. If you’ve ever had one squirrel get into your home accidentally and driven yourself mad trying to get this chattering, scampering, spastic creature out, imagine an entire city coated in a thick blanket of living, squirming, squirrelness. My teeth are on edge just thinking about it.

No one seems to know where this impossible quantity of squirrels apported from, or how they all came to be traveling en masse (squirrels are generally solitary animals that do not travel in herds or packs). There were no reported natural disasters nearby such as an earthquake or forest fire, but such an event wouldn’t create a mob of squirrels in such impossible numbers anyhow, nor would it cause them to march together in a specific direction with seemingly unified purpose.

Attempts to stave off their attack were chaotic as people began flailing wildly with all manner of implements, and even shooting them with guns. Wherever you fired, you were certain to hit a squirrel, but the sheer numbers of the rodentlike beasts made it a losing proposition. “We fired our guns and the squirrels kept-a-comin’.”

The Ohio River didn’t mean the end of the line for the squirrel blitz. The newspapers reported that the squirrels, seemingly mesmerized and being summoned by some pied piper, plunged right into the river and swam across to Cincinnati. They’d already been warned by folks on the Kentucky side about the furry armada on the march, and had their own guns ready and blazing to greet the critters.

It took several days to get the squirrels under control, with hundreds per day being killed and countless more finally being scared away and dispersed. I wonder what they did with all the mountains of squirrel carcasses? Burgoo might have been served at dinner tables for countless weeks to come.
Posted by JSH at 1:00 AM