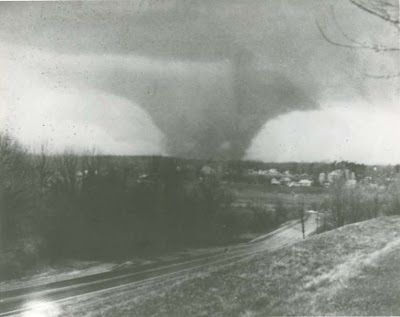 Since we're not in the tornado-heavy plains states, some might find it rather surprising that Kentucky has placed two entries in NOAA's top 25 deadliest tornado systems in U.S. history.

We bottom the list and then top it: Kentucky squeaks in at #25 with Louisville's tornado outbreak of March 27, 1890. This tornado family spawned at least 24 tornadoes that killed 76 people and destroyed 766 buildings between Parkland and Crescent Hill.

Falls City Hall on Louisville's Market Street was destroyed in the storm, killing at least 55 people by one source's tally but around 200 by another. This also has the distinction, by some estimates, of being the highest death toll due to a single building collapse from a tornado in America. Historian Bryan S. Bush writes:

"Most of the lives lost occurred at the Falls City Hall, located on Market Street, within five minutes the building collapsed with two hundred victims trapped in the rubble. Several activities occurred when the tornado hit the building. The Falls City Hall had a dancing class, which took place on the second floor, with sixty mothers and small girls occupying the class. Only twelve escaped the carnage. In another room the Roman Knights held their meeting, in which seven members were present, the Knights lost one man. On the third floor, the Knights and Ladies of Honor held a meeting with 150 members present, but only a few escaped. The Ancient Order of Foresters had eighteen members present in another room, with all members lost." 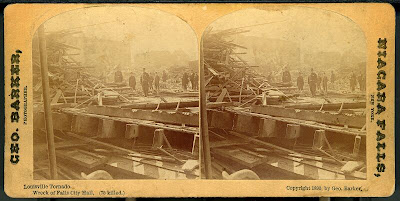 And if you've ever wondered what the heck this less-than-impressive minimalist sculpture is (see image below) in downtown Louisville, now you know: it's a monument to the 1890 disaster. 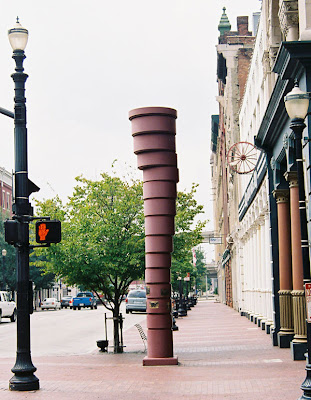 Kentucky was also involved in the #1 tornado, which is generally called the "Tri-State Tornado of 1925" but actually struck more than three states: Missouri, Illinois, Indiana, Kentucky, Tennessee, Alabama, Kansas, and possibly other states were hit by this storm system on March 18, 1925.

Louisville wasn't the only part of Kentucky affected by this group of tornados: at least three people died in Pewee Valley; 39 died in an F4 that swept away farms and homes across Allen, Barren, Monroe, and Metcalfe counties; and an F3 passed throgh Marion, Washington, Bourbon, Mercer, Jessamine, and Fayette counties, killing two and injuring 40 before it finally sputtered out near Lexington.

Southern Indiana was also badly ravaged by the twisters. The town of Griffin was nearly completely wiped off the map, and the town of Elizabeth suffered devastation of several farms. 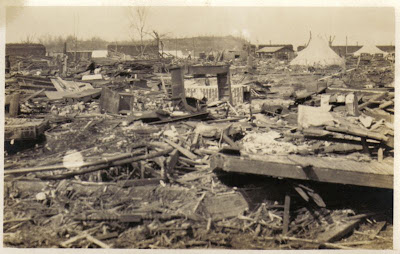 I'm puzzled why the Super Outbreak of April 1974 didn't make NOAA's top 25 charts, because by all accounts 330 people were killed from a series of 148 twisters in 24 hours. Can someone explain this omission to me?

Apparently NOAA is choosing to count each of these tornados as a stand-alone event rather than grouping them all together, yet it is by grouping twisters together that they arrive at the aforementioned "Tri-State" event and the 1890 one.

The photo below shows a tornado from the Super Outbreak approaching Richmond, from Mike Schwendeman by way of april31974.com. 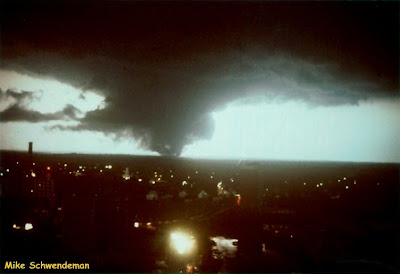