UFO Blitz in the Bluegrass Triangle 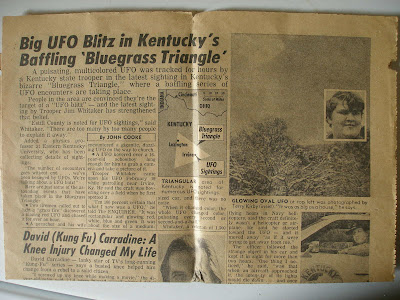 Found in the labyrinthine recesses of my archives: a newspaper clipping from a 1978 National Enquirer, exact date indeterminate. Says here that central Kentucky was reportedly experiencing a "UFO blitz" back in those long-gone days of disco and punk. 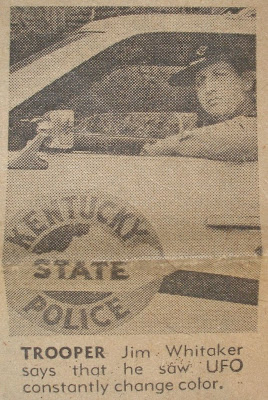 What exactly did this blitz consist of? According to the article, one of the incidents involved a pair of Madison County firemen called upon to put out a grass fire that turned out to be a "blazing red UFO" - which they then proceeded to follow across Richmond in hot pursuit for over an hour. One of the firemen, Robert Murphy, described it as a "classic" flying-saucer shaped spaceship. 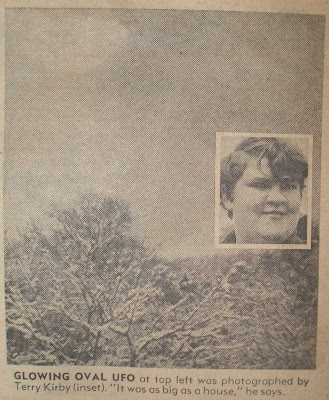 Another case was a preacher and his wife who, and I quote, "encountered a gigantic, dazzling UFO on the way to church." Elmer Hardy, then 73 years old and pastor of Bybee United Methodist Church, said they were driving to Sunday night services when the UFO approached them head-on and hovered above them. "It was about 10 stories high and 20 stories wide, with a zillion lights on it," Hardy is quoted as saying.

Then there's 16-year-old Terry Kirby from Irvine, who the Enquirer says was chopping wood when suddenly a glowing oval-shaped UFO descended upon him. Kirby had the quick wits to run in the the house, grab a polaroid camera, and snap a shot. The article also quotes other Irvine citizens like police chief Marcus Cole, who says there have been many eyewitness of flying saucers in Irvine; and Guy Hatfield, publisher of Citizen Voice & Times, is quoted as defending the experiencers: "These were all solid citizens, with no reason to say it unless they saw one".

Another Irvine sighting report was from a Kentucky State Trooper, Jim Whitaker. He spotted a car-sized UFO with red/white/blue/green pulsating lights hovering over a field in Irvine on "February 19" (presumably 1978). "Whitaker, a veteran of 1,500 flying hours in Navy helicopters, said the craft definitely wasn't a helicopter or airplane." He chased the car for two hours in the Estill County night, and made a very interesting observation: "When an aircraft approached it, the intensity of its lights would die down... and once the aircraft was clear, it would light up again!" 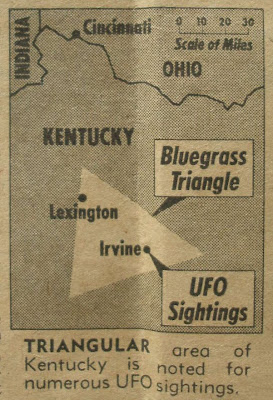 The article, although rather well-written for a tabloid rag, fails to mention the presence of the Blue Grass Army Depot at the epicenter of this "Bluegrass Triangle" of UFO activity they posit.
Posted by JSH at 9:18 PM