Bermuda Triangle of the Ohio River? 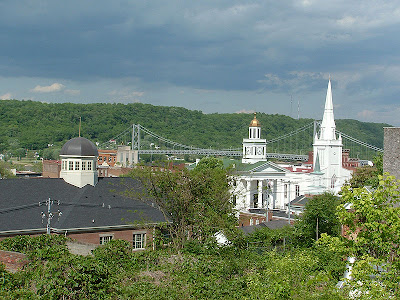 Currently part of the Wikipedia article for Maysville, Kentucky:

The story of Maysville's Bermuda Triangle began around 1992 when a barge sank near the Kentucky shoreline in West Maysville Kentucky. A subsequent salvage operation in 1994 tried to raise the sunken barge with two Navy minesweepers. The minesweepers were the next victim as they became stuck in the mud. A towboat trying to free the minesweepers also fell victim when damage to its engines rendered it crippled. Next came a salvage barge named The Hercules. The Maysville Bermuda Triangle made short work of it as well. While hoisting the original barge, the crane aboard The Hercules broke as the barge reached the surface, and down it sank again. Then The Hercules itself sank, coming to rest on top of the barge it was supposed to save. Eventually the minesweepers and the towboat sank as well. The entire salvage operation nick-named John Beatty's Navy, after its owner, fell victim to what an Army Corps of Engineers spokesperson would later call, "The Bermuda Triangle of the Ohio River".

Like much of Wikipedia, the section of text is unsourced. In fact, it may not remain on the article long since it's already been tagged as needing a citation and it's part of a trivia section that will likely get deleted. (Also in that same trivia section: "Seen from above at night, the streetlights of the downtown area form the outline of the Liberty Bell, crack included". Hmmmm. Now that I gotta see.)

I'm still researching this "Maysville Bermuda Triangle" matter, but nothing surprises me about the Ohio River. Time and time again, it's proven to be a very strange and, I daresay, cursed place.
Posted by JSH at 10:17 PM

Doesn't sound like either a nice swimming hole or a place to go skinny dipping.

Thanks to Dupont's pollution upriver, I wouldnt recommend it.