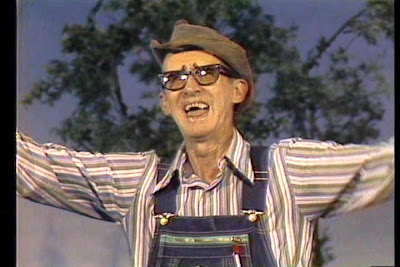 David "Stringbean" Akeman, star of the Grand Ole Opry and Hee-Haw, was born in Annville, KY (also the birthplace of world champion fiddler Freddie Langdon) in 1916. Although he began his musical career as a banjoist at the age of 12, joined old-timey legend Asa Martin's band, and performed solo on radio stations such as WLAP in Lexington in the 1930s, it wasn't until the late 1940s when he really came into his own as a country music superstar.

That's when he struck up friendships with Grandpa Jones and Uncle Dave Macon, and became a regular on the Grand Ole Opry. A recording contract with Starday Records soon followed, and hit records such as "Chewing Gum". This, in turn, led to his stint on the hugely successful Hee-Haw television show, where he performed his old-timey tunes for a new generation of appreciative ears. He also had a running gag playing a scarecrow with a crow squawking on his shoulder, and did a regular routine called "Stringbean's Letters from Home" wherein he'd read mail (ostensibly) from the folks back in Annville. 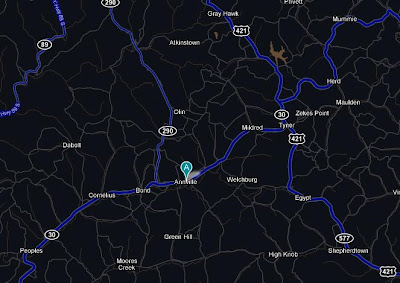 Like many who grew up during the Great Depression, Stringbean had a great distrust of banks, and walked around with several thousand dollars on his person, in the front zip-pouch of his ubiquitous overalls (The overalls, by the way, were not a pose or a affectation - that's what he wore pretty much 24-7, onstage and off). It was well known around Nashville that String had his life's savings stashed away somewhere at home.

Some writers have hinted broadly that certain Hee-Haw cast members may or may not have been indirectly responsible for Stringbean's murder because of their blabbing about his money to others; but the fact is, Stringbean himself made it no secret, and often flashed the fist-sized wad of bills. Not out of ostentatiousness or bragging, but perhaps merely out of an innocent naivete about the evil and corrupt nature of his fellow man.

On November 10, 1973, John A. Brown and Marvin Douglas Brown conspired to follow Stringbean to his home as he left the Ryman Auditorium, for the purpose of taking his life's savings at gunpoint. Just as with the Kansas robbery-turned-murder case popularized in Truman Capote's In Cold Blood, the men failed to find any money in their home invasion, and out of frustration and confusion, ended up killing Stringbean and his wife Estelle for no good reason. 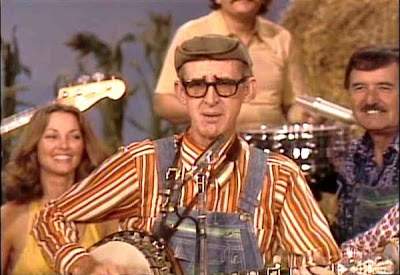 But the question then remained: what did happen to Stringbean's money?

It wasn't in the cookie jar, the medicine cabinet, under the mattress, pressed inside the family Bible, nor stashed in a sock drawer. The murderers had plenty of time to tear the place apart looking for it, but they found nothing. All they got away with was a saw and some of String's gun collection.

For years, fortune-seekers and treasure hunters risked arrest to trespass on the property, armed with metal detectors. They were certain that String had followed the longstanding southern tradition of burying his riches in tightly sealed mason jars somewhere in the yard, surrounding acres, or nearby wilderness. The money has to be here, they all thought, it simply has to be. Where else could it have gone? The house itself had seemingly been thoroughly ransacked, first by the burglars, then by everybody and their brother.

Had String been fibbing about his wealth? Had he actually secured a secret bank account, and used the "home under the mattress" story as dazzle camoflage to throw snoopers off the track?

23 years later, in 1996, the mystery was solved. Stringbean's lost treasure was accidentally discovered by a man who had moved into the house. A removable brick near the chimney revealed a hiding place in which over $20,000 in cash was found stashed, but the bills were decayed and partially eaten by rats. According to Wikipedia, $20,000 in 1973 was roughly equivalent to $98,565 today. Given String's income and his spartan, no-big-spending lifestyle, it's entirely possible that twice that amount could have originally been stashed, but ended up completely destroyed and lining some rat's nest. 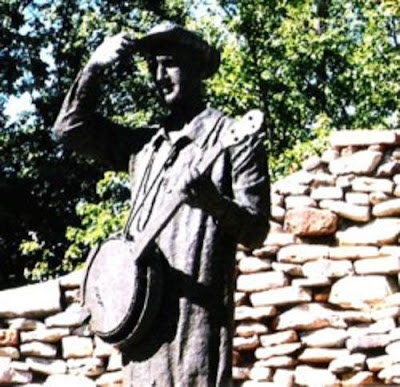 Nowadays, the Stringbean Festival is held every year in Annville to pay tribute to the man. I was fortunate enough to have attended the inaugural event, which featured appearances by Grandpa Jones, Ramona Jones and Porter Wagoner, plus an early appearance by one of my favorite local combos, The Moron Brothers. The black Stringbean t-shirt I got there was my lucky fishin' shirt for years when I used to live in Berea and cast my line out at Owsley Fork.

The site for the Stringbean Festival consistently spells his name as "Akemon", but his own grave spells it "Akeman".

Hear some Stringbean mp3s by clicking here.
Posted by JSH at 6:51 PM

The spelling of the name with an "o" was how I always saw it spelled in Jackson Co. by Stringbean's kin.