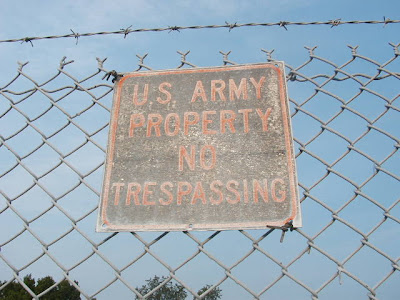 The Blue Grass Army Depot is located in Madison County, KY and is well known for being a storage facility for nerve gas. Each year they release free calendars to local citizens, as part of a public relations drive to show everyone "We're really just a simple ammo dump, and there's nothing to fear. Just ignore the Black Helicopters and UFOs. Really. Trust us."

Back in the early 90s, when I ran an antiques business from Richmond and Berea, I had a series of conversations with an eccentric old fellow (who will go unnamed here), who used to tell me a great deal of tall tales and unsubstantiated rumors about what was going on in the Depot. How he could possibly know this information, he refused to say. I do know he served in Vietnam, but that's the only military connection I ever gleaned for certain about him.

Among his grandiose claims were:

1. Alien technology recovered from a crashed alien spacecraft was being reverse-engineered and used in experimental aircraft being tested at the Depot.

2. He said he had it on authority from people he trusted, that the alien spacecraft was stored, at least at some point in time, underground at the Depot. Why Kentucky?, I asked. "They wouldn't keep it where everyone expects it", he said.

3.All manner of cutting-edge secret aircraft are tested at the Depot, including the Stealth Bomber, and many others that no one's ever heard of. He mentioned one such secret plane in particular, one that was completely invisible because its hull acted as both a camera and a monitor, projecting what was on one side of the plane to the other side, no matter what angle you were facing the plane from.

4.He said that the Depot was the military's main headquarters for Chemical Warfare, and that the first Gulf War was practically run from within the Depot.

He made a great many other wild claims, but these are the ones that are most relevant to our field of study here. At the time, I didn't take anything this person said too seriously. He didn't look or act like the type of guy you'd expect to have security clearance anyplace. He was pretty much drunk a large percentage of the time, too. But I often thought back to the bizarre "truths" he'd confided to me, especially when seeing UFOs in the area and hearing other talk about the UFOs they'd seen.

But gradually, I began to find out that at least some of what I had been told was true. The Blue Grass Army Depot is the main source for the Department of Defense's chemical weapons, according to information found right on their own web sites.

I considered his "invisible plane" story to be the most outlandish detail of all, even more so than the alien story. Then I found out years later that such an aircraft does exist, with a technology called "Electrochromatic Panels", which have been researched extensively by respected journalist Norio Hayakawa.

The more we learn about the Blue Grass Depot, the more questions arise. One thing is for certain, and that is they are not just a simple army ammo dump. 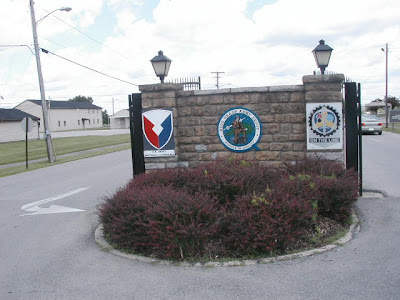 Were one to compile an exhaustive list of all UFO sightings in the Kentucky area (and more specifically, the Depot area), it would be massive enough for a site all its own. But UFOs do not get reported around here much anymore, even though they're seen on an almost nightly basis. It's something the locals have grown accustomed to, much like people near Area 51. One gentleman who resides within sight of the depot made that connection himself, saying "I guess you could say this is like the Area 51 of the South."

The types of UFO reported run the gamut of all the traditional variants: saucer-shaped, cigar-shaped, triangular, mystery lights, etc. Unmarked Black Helicopters are also a recurring sight, almost daily, in the area. They are frequently seen coming in and out of the depot, even in broad daylight. Some seem to be coming or going in the general direction of Fort Campbell, or sometimes the nearby Madison County Airport. Some are very advanced and of unknown make, others appear to be Blackhawks or "Little Birds".

There have also been numerous reports of the Stealth Bomber being seen in Kentucky, especially around the northern border near Cincinnati. 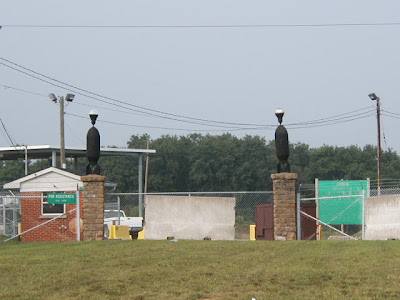 Above photo: note the charming bomb motif at the Depot's Operation Golden Cargo checkpoint.
Posted by JSH at 8:09 AM

My buddy called me up going through Kentucky from Houston to Canada on Oct 23, 2008. He left a voicemail. Amazing message of UFO following him and darting through the sky.

So, in a way that makes me wonder.