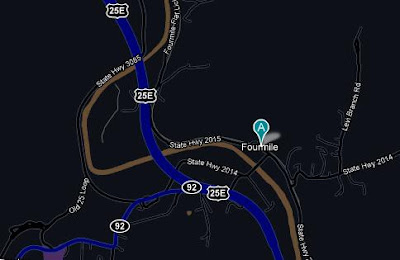 As reported in the Lexington Herald-Leader, a bulldozer for Vinland Energy of London, Ky., was recently caught destroying a family cemetery near Fourmile, KY.

According to the article, Vinland Energy Vice President of Operations Scott Gilbert said the company had no idea that the cemetery was there, and pointed to maps of Bell County which don't list the graveyard. However, the graves were clearly visible, and there's no reason on Earth anyone standing on that property could not know it was a cemetery. The land was inspected by a surveyor - whose identity is not yet known - who tied a ribbon around the area designated to be bulldozed. It is unfathomable that neither he nor the bulldozer operator could not have noticed the graves.

And as a commenter on the online edition of the Herald-Leader noted, it took only a quick internet search to find proof that the cemetery's existence was indeed well-known.

What the news story doesn't tell us, though, is how Vinland came to get the rights to dig there in the first place, and who specifically authorized them on the property. It also doesn't spell exactly what sort of "project" Vinland was there for, but we do know that Vinland is in the business of oil-well drilling and natural gas. They're a subsidiary of a larger oil-drilling company called Vanguard out of Texas.
Posted by JSH at 11:47 AM