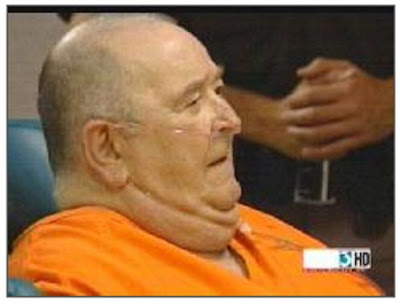 MADISON, Wis. -- Authorities in Ohio said Tuesday that Edward W. Edwards has confessed to a 33-year-old double homicide, according to a CNN report.

Edwards faces two counts of first-degree murder in the deaths of Tim Hack and Kelly Drew, who disappeared from a wedding reception in Sullivan in 1980. Their bodies were found in the woods weeks later.

The Summit County prosecutor's office and the Norton Police Department said that Edwards has admitted killing a young Ohio couple in 1977, CNN reported.

In the Wisconsin case, investigators arrested Edwards in July after they matched DNA on Drew to him.

His trial in Jefferson County is set to begin June 14.

Note that the Jefferson County referred to in the article is in Wisconsin. Edwards had been living in Louisville for years when he became implicated in crimes in Wisconsin. Since then, he's become a suspect in many other cold case files.
Posted by JSH at 1:51 PM

Since the dance hall was the one tie between Edwards and the murdered couple, is it possible Edwards was working for the facility when Sjoberg was abducted?

Perhaps the Sjoberg family may finally get some closure, as well.