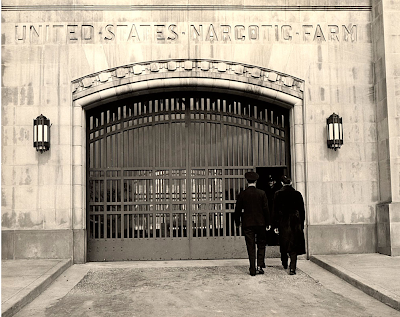 For most of the 20th century, Lexington was the drug addiction capital of the nation. Not because of its citizens, but because of the inmates at the U.S. Narcotics Farm - also known as the U.S. Public Health Service Hospital, the NIH Clinical Research Center, and the Federal Medical Center.

Construction started in 1933, and was completed in 1935. From then on, some of the worst drug-addiction cases around the nation found their way to the good old Kentucky hills. As the popularity of Heroin grew in beatnik musician and literary circles, celebs and celebs-to-be like William S. Burroughs, Chet Baker, and boxer Barney Ross ended up here for "the Lexington Cure". But as time passed, the center's ideas for treatment of drug addiction remained laughably primitive. According to a 1962 survey, the hospital had a success rate of less than 7 percent.

Burroughs mentioned his time spent at Lexington often in the course of his writings, especially his first novel Junkie, written under the pen name William Lee. He become addicted to Heroin in 1942, but managed to live in a highly adaptive state with his burden. Fellow writer Alan Ansen met Burroughs at the height of his addiction, and described him as a "totally autonomous personality". Ansen was impressed with Burroughs' eloquence and intelligence, and his ability "to use drugs without losing consciousness or articulateness".

The "cures" at Lexington were useless and Burroughs remained an addict. It wasn't until 1957 that Burroughs was permanently cured of drug addiction in the U.K. by Dr. John Yer­bury Dent's ground-breaking apomorphine therapy. Upon returning to the states a healthy man, he tried to interest the docs at the Lexington farm about Dr. Dent's discoveries. None of them would listen. They preferred their own ineffective and barbaric methods.

By the late 1960s, however, the public and the media gradually became aware of the psychiatric atrocities taking place, and the Center's reputation grew more and more infamous. An article in the Lexington Herald in the early 1970s exposed cruel and bizarre "treatments": "Some of the patients were stripped of their clothing and their pubic hair burned off, that some of the male patients' genitals were placed in ice water for long periods of time." 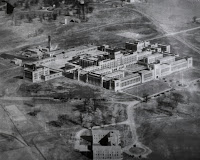 The junk really hit the fan when it was learned that tax dollars were funding wild experiments, with hundreds of federal convicts volunteering as human guinea pigs and being rewarded with Heroin and cocaine! The institution was dealing smack and coke even as it was raking in the megabucks to try to fight these drugs. And partially declassified CIA documents relating to the controversial MK-ULTRA program not only mention the Lexington hospital as a place of interest, but as an actual CIA-cooperative asset:

Because of the unconventional use of the materials involved, CD has had added difficulty in obtaining expert services and facilities to conduct tests and experiments. Some of the activities are considered to be professionally unethical and in some instances border on the illegal. These difficulties have not been entirely surmounted but good progress is being made. Another problem is raised by the lack of professional knowledge of lysergic acid, the basic substance with which CD is concerned...

The National Institute of Mental Health conducts tests on its ape colony to study the effects of P1, and knockout material and has provided much information of operational value. Human experimentation is more difficult to accomplish. The best results have been obtained from mental institutions such as [one line redacted] Narcotics Addiction Hospital, Lexington, Ky., [one line redacted].

An arrangement is in process with the [one line redacted] which is expected to produce valuable results. Even with all the data gathered from these institutions there remains a considerable area of doubt. These tests and experiments are conducted under controlled conditions and the results may be quite different from those obtained in the operational use of the material. In this respect, [half-line redacted] must be experimental as well. Much more testing must be conducted before the behavior program can be considered to have accomplished its objective. [One-half page redacted]

In 1974 the center was turned into a federal prison but maintained a sideline as a run-of-the-mill psychiatric hospital until 1998, when two inmates allegedly killed each other and it was decided to move all psychiatric prisoners elsewhere. Currently the prison houses, last I checked, 1,530 men and 284 women.
Posted by JSH at 7:25 PM

This is Bluegrass Conspiracy Gold! CIA, MK-ULTRA, experimentation involving human test subjects and narcotics? Wow! How convenient that it became a prison shortly after the bizarre treatments were discovered. Could it be that Lexington became (or still is) a government hotspot for parapsychological experimentation, under the guise of a "run of the mill" psychiatric hospital? Man, I am going to be tripping on this one all day. Good stuff, Mr. Holland.

Wow, This is a great story, I'm a Student at UK and Love hear about Lexington's History.

I think my father was a patient at this institution in the 1950s. I wonder if there is any way of finding out for sure. If anyone knows, please contact me at sajody@yahoo.com.