The Death of Hunter S. Thompson 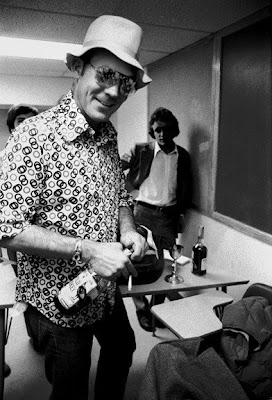 The great anti-establishment icon of the 1970s and 1980s, Kentuckian Hunter S. Thompson, allegedly took his own life with a handgun in his Aspen, CO home on February 20, 2005. He left the single word "counselor" typed haphazardly in the center of a sheet of paper in his typewriter.

He had been in a phone conversation with his wife, asking her to come home from the gym to help him on a column he was writing. Suddenly, his wife says, he went silent on the other end of the phone. He didn't hang up the phone, he simply stopped talking. She heard no shot.

I repeat: she heard no shot.

Shortly before his "suicide," Thompson had been an increasingly outspoken critic of the U.S. Government's role in 9-11, and was said to be working on a massive exposé alleging the Bush administration's complicity in the World Trade Center attacks. As Mack White says:

"Thompson's family says he was not depressed, nor was he in enough pain to kill himself. In fact, by all reports, he was quite happy. He was talking on the phone to his wife, getting ready to work on his column, when he decided it would be wise to kill himself, so that he could go out (we are told) while still at the top of his form, even though this would mean not finishing his column or his expose on 9/11 (potentially the most important thing he would ever write)?..."

In Thompson's own words: "the US government was going to benefit, and the White House people, the republican administration to take the mind of the public off of the crashing economy….And I have spent enough time on the inside of, well in the White House and you know, campaigns and I've known enough people who do these things, think this way, to know that the public version of the news or whatever event, is never really what happened."

Though his best-known work is the breakthrough "Fear and Loathing in Las Vegas," for my money his finest hour is his 1959 novel "The Rum Diary." In it, he writes like the early Jack Kerouac's dark twin, and sums the era up with Burroughs-like incisiveness: "I shared a dark suspicion that the life we were leading was a lost cause, we were all actors, kidding ourselves along on a senseless odyssey. It was the tension between these two poles -- a restless idealism on one hand and a sense of impending doom on the other - that kept me going."

Quite unlike William S. Burroughs, however, Thompson was that rare breed of writer who, myth and hype aside, really did write better under the influence of drugs and madness. As critic Kurt Loder has stated, Thompson spawned a whole generation of young slacker writers trying in vain to follow in his footsteps, failing to understand that Thompson was already an accomplished seasoned journalist before he became a walking pharmacy.

Bill Murray portrayed Thompson in the incredibly low-budget film Where the Buffalo Roam, and irritated fellow cast members of Saturday Night Live to no end after picking up Thompson's mannerisms while preparing for the part. Fellow Kentuckian Johnny Depp, who played him in the film adaptation of Fear and Loathing in Las Vegas, will reprise the role in an upcoming film The Rum Diary.
Posted by JSH at 10:48 PM


It's okay. He's just admiring the shape of your skull.